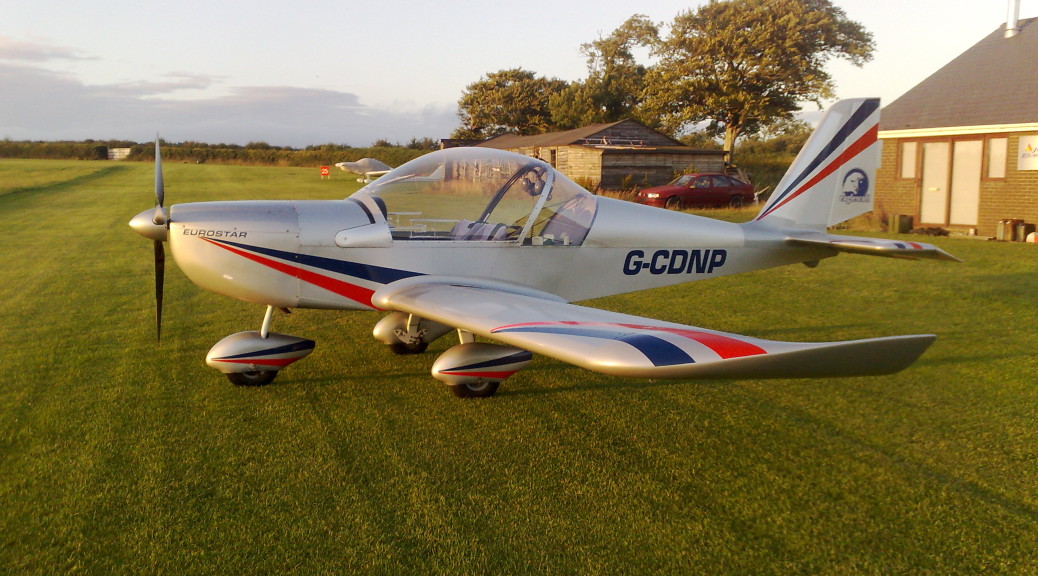 Typically a 30 minute flight will take you to the North Devon coast around Instow, Appledore and Bideford returning via Torrington. After a short demonstration you will be flying the aircraft from overhead the airfield all around the route and back to final approach! The Eurostar has stunning visibility and is the best aircraft for a first flight over North Devon. £99 for 30 mins

A 60 minute flight may take you towards Exmoor before turning to the North Devon coast near Combe Martin.  Then turning West, along the coast passing Ilfracombe, Morte Point, Woolacombe, Croyde, Saunton and into the Barnstaple/ Bideford Bay, to Appledore, returning via Barnstaple or Bideford.
Once again you will be flying the aircraft all around the route and back to final approach. £189 for 1 hour.

SOUTH DEVON COASTAL TOUR
This flight takes around 2hrs 30mins. Take off from Eaglescott and head towards Tavistock along the West side of Dartmoor giving you the contrast of the dramatic views of the moor as you head onwards to the South Devon coast at Plymouth, view the docklands, then to Salcombe and along the coast to Torquay and Dawlish before heading North up the East side of Dartmoor to Eaglescott.
Price £399

NORTH DEVON COASTAL TOUR
This flight takes around 2 hours. Take off from Eaglescott and head out to Dunster and view the Castle before reaching the coast at Minehead and onwards along the rugged North Devon Coast with its stunning beaches. Continuing on to Hartland Point and then Bude before heading back to Eaglescott.
Price £299

To pay by cheque, please:
a. Send a cheque made payable to ‘ EAGLESCOTT ‘ for the appropriate amount. Mark your envelope ‘Voucher ‘.
b. Enclose a short note saying who for, who from  and whether Birthday, Christmas or Anniversary present.
c. Enclose a stamped addressed envelope, which could be sent to a 3rd party address to maintain the element of surprise.

DUE TO THE CURRENT SITUATION THE AIRFIELD IS CLOSED TO ALL VISITORS BY ROAD. If you wish to receive further information about the Airfield or our Club, consult the pages of our website or email.
All Flying School Aircraft and Trial flights are currently suspended due to the ongoing situation.
If you have an existing flight booked for this year or one of our own vouchers then rest assured that they will all be honoured and available to be rebooked when flying recommences.

FLIGHTS: If you have one of our EAGLESCOTT AIRFIELD VOUCHERS for a Eurostar flight please email.

Our vouchers are valid for two years.

EMAIL NOW FOR BOOKINGS  in our two seat training aircraft.

If you have a voucher from an experience company and the expiry date is approaching don’t worry exchange it for one of ours.

Any enquiries telephone between 8.15am to 9.30am only. If no reply email.